The immediate neighborhood of White Plains is a vast green of various species of trees, lush forest, and rice paddies. The site is a mere minute away from the downtown proper of Porac. White Plains Porac is less than 3km from Exit 125 (Floridablanca) of the Subic-Clark-Tarlac Expressway (SCTEX).

The municipality of Porac is less than 90km from Manila, and it is the largest town in Pampanga. The town is just 16km away from Pampanga’s capital San Fernando; less than 20km south of Angeles City and just north of Floridablanca, all in Pampanga. The town offers the best opportunities for business and employment, as it is just a spit away from the financial and business centers of Angeles City, Guagua, and the City of San Fernando.

The province of Pampanga hosts two PAF (Philippine Air Force) airbases: Basa Air Base in Floridablanca and the former US-occupied Clark Air Base in Angeles City. Pampanga is now experiencing tremendous growth in its economy. The Clark Global City is now highly-developed and is situated in Clark Freeport Zone, just a few minutes away from White Plains Porac. But there are more to expect once the family settles down in White Plains Porac Pampanga: schools, churches, hospitals, shopping havens, and workplaces abound within the vicinity of the housing development. 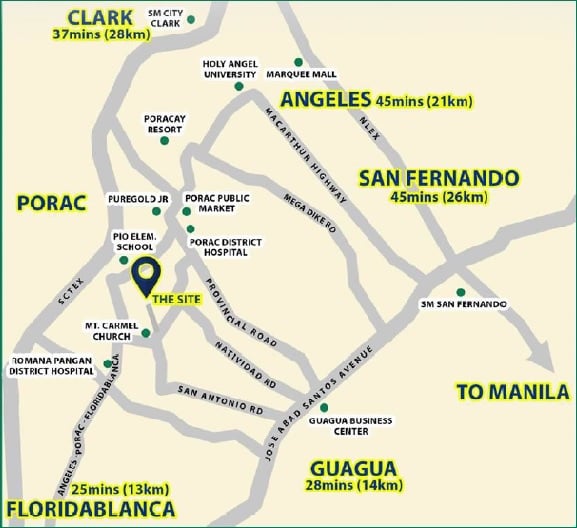